The Axis deer, also known as Chital, or the spotted deer, is indigenous to the open grasslands and forested regions of India, Sri Lanka, Nepal, Bangladesh, and Bhutan. It also inhabits parts of Pakistan and northeast China. It is the most common deer species in Indian forests, where its population is largest. Axis deer were introduced to Texas in 1932, on private game ranches in the Hill Country near Kerrville. By 1988, herds of them were found in 27 counties in central and southern Texas. Thousands of free range axis deer now range throughout Texas. They are most populated on the Edwards Plateau, where the land is similar to that of India. They can be found in herds as small as two or three in number, all the way up to more than a hundred. The herd leader is usually an older, wiser doe. Their breeding style is very similar to that of domestic livestock. They also have a rapid reproduction rate, and they are known to birth multiple offspring at the same time. It is this high reproduction rate that contributes to their success as an introduced species. It is also why Axis deer hunting in Texas is very popular. 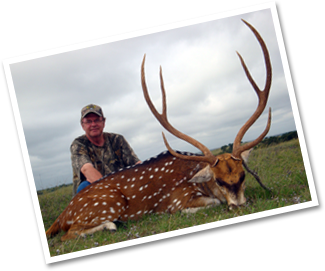 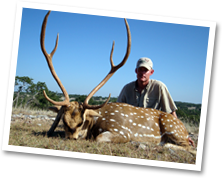 The Axis is now one of the most common deer in southern areas of the United States. The hunting season for them is year round. Their births occur every month of the year, so there are always bucks in all stages of the antler cycle during the year. The bucks can be fully antlered, or in “full horn”, any time of the year, because they grow and shed their antlers on their own clock. Axis deer hunting in Texas therefore takes place many times during the year. In the state of Texas, they are classified as an exotic species, so there are no seasons designated for when they can be hunted.

The Axis Deer is widely considered to be one of the world’s most beautiful of all deer. Their coat of unique reddish-brown coloration is accentuated by the white coloring on their stomach and throat and tail regions. Most all Axis Deer have a line of dark fur running the length of their bodies with spots of white on their upper body and sides, which stay with them throughout their lives. Bucks can weigh as much as 250 pounds, while does frequently weigh a little more than 100 pounds. The bucks average about 35 inches tall at the shoulder, and measure a total of 5.5 feet, on average. Their lifespans range around 8–14 years. Their most outstanding assets are long three-pronged antlers with a barrel shape, and curve in a lyre shape, sometimes extending to lengths of 2.5-feet high. The Axis Deer Trophy makes an especially desirable addition to most trophy hunter’s wall.

Because the majority of hunters view fall and early winter as their primary hunting season, fall and winter Axis are more heavily hunted. As such, hunting in Texas during the warmer seasons tends to be much more fruitful, because the deer with hard antlers in the spring through summer are hunted less and are therefore more plentiful, older, and larger. So while it’s true that any set of 28-32 inch horns would make for an impressive trophy, spring to early fall is prime time for Axis trophies greater than 34 inches. The warmer season, therefore, is a time of year hunters don’t want to miss. 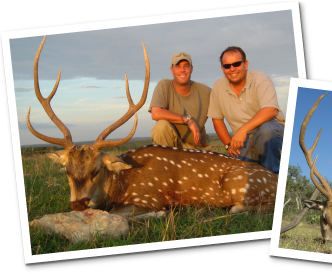 What are some different ways Axis deer are hunted in Texas?

Axis deer hunting in Texas can be challenging, done by spot and stalk, standing, blind, or on 4x4 electric utility vehicles, and can be carried out by shotgun, hand gun, bow, rifle or black powder. They are a challenging species to hunt, because of their especially elusive nature. For the die hard hunter, Axis deer are a great between-season game species to hunt.

Many consider Axis venison to be the best tasting wild game meat there is, which is another reason deer hunting in Texas is so popular. With healthy bucks weighing in at over 200 pounds, they can easily provide plenty of food for months. Axis meat is very lean, high in protein, and almost always tender no matter how it is prepared. The venison can also be substituted for beef in most situations, and can taste as good, if not better.

That said, there is no question the Axis deer has had a great impact on hunting and wildlife in Texas. For better or worse, the species is here to stay. It is our job as outdoorsman to embrace our Axis population, and make the best of what they offer. So whether we hunt them, eat them, observe them, or dislike them, the deer is a true survivor.

Email Us At Desert Safaris